In this article, we will look at how to choose the right match to bet on a draw by using statistics, and how to spot a fixed draw based on publicly available data.

A football match can have three outcomes (with respect to one team): a win, a draw, and a loss. There is a category of punters who place a high priority on betting on a draw.

The reasons for this are the following:

The Statistics and Probability of a Draw in Football

You will often read on the web that, since the probability of a draw in football is 33.3%, odds higher than 3 are beneficial for punters. But, in my opinion, the expected probability of an event is one thing and statistics is another.

Let us turn to statistics first and see how often football clubs play with a draw. Just remember that the situation changes from year to year, so there is no point in looking back too far. Three last seasons should be enough, I think.

The source of the data below is the website sport12x.com. 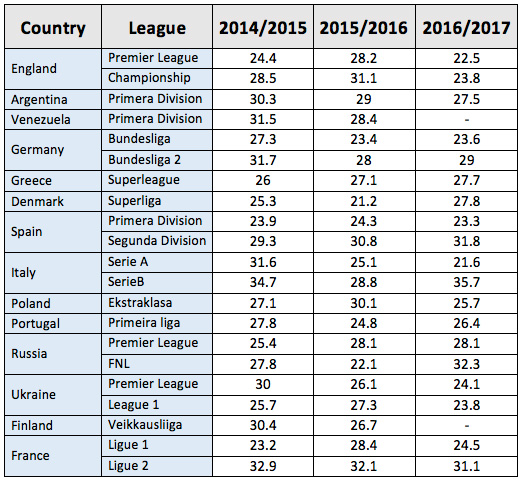 Judging by the figures in the table, there is no obvious tendency in the outcomes. For most of the countries, the percentage of draws in championships has gone up and down.

Only in some of the countries, such as Italy (Serie A), the percentage of draws has dropped, while in the Spanish second most important football league, it has, on the contrary, increased. The most striking gap here is between the results for Russia (FNL) — 22.1% and 32.3%.

If you want to single out championships that are most ‘prone’ to draw results, these would be the second divisions of the leading European football nations — such as Spain, Italy, Germany, and France. To these should be added Argentina and Venezuela.

As for the perceived probability of a draw, this depends on a number of factors that will be covered below. You cannot talk about 33.3% as if all outcomes are equally probable and ignore such factors as how strong the teams are, etc.

It is absolutely clear that if a favorite plays with an outsider, the odds for a draw may go above 10, while for equally strong teams they typically vary between 3 and 3.4.

The Rules for Choosing Matches for Draw Bets

Fixed matches are one of the weaknesses of betting on a draw. One popular scenario is exchanging 3 points so that the teams could hold their current position.

Most often this applies to the lowest leagues and clubs from the middle of the tournament table. The tactic has developed after they introduced the practice of scoring 3 points for a win.

One of the signs of ‘dirty play’ is low odds for the draw. It is believed that if the odds for a draw are lower than 2.3, the match is fixed.

All bettors, as well as bookmakers, well remember the match between Denmark and Sweden of the Euro 2004 group stage. To go to the next stage, both teams would have been okay with a draw. So, a draw it was (2-2), no miracle happened, and Italy went home. The odds for a draw in the match were 1.9…

The Strategies of Betting on a Draw in Football

To bet on a draw in football, you can use standard types of betting — single bets, accumulator bets, and system bets combined with a certain financial strategy. Let us have a closer look at this.

The strategy is also known as “odd spread” or “odd difference”. The idea is to make 2 bets at the same time: one on odd total goals and the other — on a draw, thus forming an incomplete (partial) arbitrage (someone calls it dutching). I cover more of this here: Dutching Strategy. Odd difference.

Flat Betting on a Draw

Typically, punters choose to bet on a draw in matches with odds varying between 3 and 3.4. This means that, to be in the black in the long run, bettors have to win every third bet or, in other words, 33.3% of the bets. Not an easy task, to say the least…(More about Flat betting)

Chasing a Draw (Martingale with draw)

There are 2 variations of the strategy:

One of the more popular variations of betting on a draw in football is the ‘2 out of 5’ system.

Since we have already talked about accumulator betting before, let us move straight to the point (those who are new to the subject should study the information at the link first).

We need to pick 5 matches that, according to our estimations, may result in a draw. Now, in the middle of May, most European championships are either over or there are only 1 or 2 days left, which makes our task more difficult. Still, we can conduct a small analysis and make our choice.

Strictly speaking, the teams we chose hardly meet the requirements listed above. However, the opponents are about equally strong and almost in all the matches the favorites played as a visiting team. 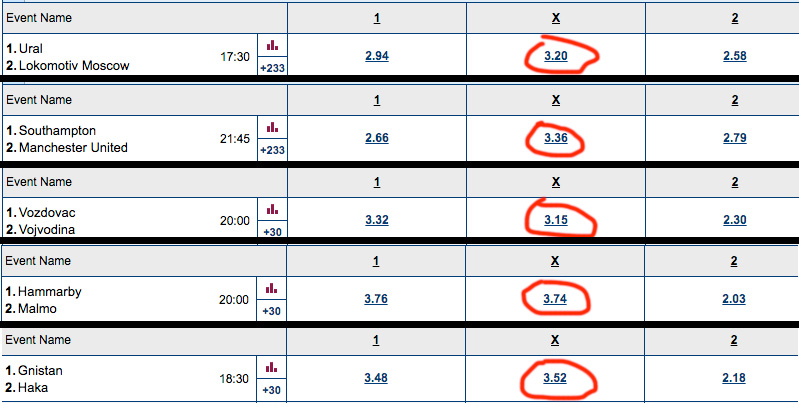 Now let us compose all possible accumulators with two events. There are total ten of them:

Suppose our bankroll is 200 dollars — 20 dollars for each selection. At the end of the day, it turns out that we were right in predicting 2 draws (the second and fourth matches).

Betting on 0-0 Strategy in Football

The strategy comes in two variations:

In my opinion, even if you consider all the above circumstances, you still cannot make a 100% accurate prediction, as each of the 22 players can make a mistake leading to a goal at any moment (not to mention the possibility of an own goal).

If you ask me, betting on a draw should not be your primary betting strategy. However, despite high risks, I do make accumulator bets on a draw now and then (typically, two-fold ones with total odds of 10). I do this mostly intuitively choosing teams and matches that I am acquainted with and can make judgements on. And sometimes my accas do win…